and outside of the walls of the Fort Crown Point, Rick Sherman, Noel Levee, Bud Minor, Ram Minor, and Gavin Watt were huddled around a campfire.
All came to the collective realization that they had been mulling around in their individual minds — the concept for an event that even these “free thinkers” considered impossible to pull off, thus none had ever verbalized the idea before.
I am not sure who was the first to test the water by suggesting this event, but ten minutes later the idea was a dream, one month later meetings were being held with local politicians and historians from all over the Schoharie and Mohawk Valleys, and one year later the largest event of it’s kind was over, and a grand success.
This event was the recreation of Col. Sir John Johnson’s Invasion of the Mohawk and Schoharie Valleys, more commonly referred to by historians as “The Johnson – Brant Raid of October 17th-19th, 1780″, held on Columbus Day Weekend in October of 1990.
The original invasion was the largest and most successful Loyalist raid of the entire American War for Independence, and the 210th Anniversary Commemoration was the largest event of it’s kind.
Nearly 800 men-at-arms and over 1000 living history specialists (reenactors), spent three days recreating every action that took place during the original invasion. Not only was every action recreated, but it was held on the original ground.
The entire event covered over 60 miles, starting on Saturday at sunrise at the Upper Fort site in the Southern Schoharie Valley, encompassing the Battle of Klock’s field in St. Johnsville, and the final battle, the battle of Johnstown, done at the site of the actual battle on O’Neil Ave. near Johnson Hall in Johnstown in the Mohawk Valley.
Over the three days, there were 5 major battles,  several burnings and smaller skirmishes, military and civilian dances, civilian interpretations, Grand Reviews, musketry firing from the tower of the Old Stone Fort for the first time in 210 years, and much more.
The event was such a huge success that Rick, Bud and Noel decided that possibly a stronger link could be forged between the recreated Regiments serving in the Upstate New York State area. Art Bush, the founder of the Loyalist Claus’ Rangers, also joined the cause.
Thus the founding Regiments of the BVMA are:
15th Regiment Albany County Militia – Schohary District, under Rick Sherman
Capt. Lytel’s Coy 3rd Batt. Tryon County Militia ( now “Congress’s Own” 1st Canadian Regt.), under Noel Levee
1st Foot Guard – Lt. Company, under Bud Minor
Claus’ Rangers under Art Bush.
​ Honorary status was requested by the King’s Royal Regiment of New York under Gavin Watt, and the Burning of the Valleys Military Association was formed.
The first year  Steve Hines and the 4th Tryon County Militia, Jim Morrison and the 3rd Tryon County Militia, George Wessling and the Royal Artillery joined the organization.  These units were followed by Jim Straite  and the 47th Foot, Karl Crannell and the  2nd NY, Terry Glasier with the 6th Mass, Ken Sewell and Crysler’s Loyalist Company, Dan Gordon and the Loyal Scots, and John Falharber and the 2nd Continental Artillery.
Over the past years the BVMA has grown to 30 Congressional and Crown regiments as well as Sutlers.

And then a bit of a change

Over the 25 year period since the formation of the BVMA, the membership, focus of historic sites, and the reenactors themselves have changed. Most of the founding units  and members had disappeared from the hobby, and many sites are more focused on interpretation rather than Revolutionary War era battles.
Many sites within the Tri-Valley Region span the period from initial settlement through Federalist period, and members of the current  BVMA Revwar member units also reenact both the French and Indian and 1812 eras.  Accordingly, a decision was made to extend the period supported by the BVMA to 1740-1820, thereby spanning the early Palatine era and adding as our working title the Valley History Alliance (VHA).
The new structure will allow us the opportunity to work with many of the smaller valley historic sites in a fashion that accomodates their needs.  At our recent opening day program at Ft. Klock, members of the VHA presented displays and interactive programs displaying 18th century skills and activities that entertained and educated over 200 visitors to the site. 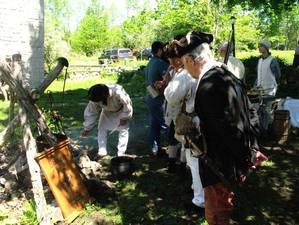